“We need to turn the page. But we should read it first.”  –Gorka Landaburu. 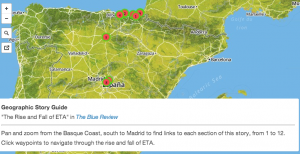 To understand the recent history and current reality of the Basque Country, one cannot ignore Euskadi ta Askatasuna, better known by its initials ETA. Since the 1960s, ETA has been a constant presence in the politics of the Basque Country. Only a few years ago did ETA finally declare, nominally, a permanent cease fire, though there are still some who doubt it is real.

Mark Bieter, who also writes an excellent blog, has written an insightful perspective on the history of ETA and ETA’s place in the history of Spain and the Basque Country entitled “The Rise and Fall of ETA”, published in The Blue Review. The focus is on the aftermath of ETA, now that it has presumably ceased activity, but Mark also summarizes ETA’s origins and its history. His article is peppered with commentary from politicians, journalists, and historians who try to place ETA in the context of the Basque Country’s history.

There are two incidents that stand out in the things I remember most from my year in the Basque Country (1991-92). First, I recall entering a bar in the Parte Vieja of Donosti, which must have had strong sympathies with ETA. When one of the patrons learned that me and my friend were Basque-American, he began telling us, in his alcohol-induced slur, that we were brothers and that we must fight the Spanish, together. A second event occurred in a small town in Bizkaia. I was driving with a friend and we passed a Renault dealership that ETA had fire-bombed, because it was a French company and the French had just arrested some members of ETA. My friend reacted very strongly, saying how ETA was destroying the Basque Country. This wasn’t an “immigrant” from the southern part of Spain, but a man from the rural countryside who’s first language as a kid, even in Franco’s Spain, was Basque.

So, even to a visitor, ETA’s presence was strong, but the context for its existence and actions was something that was difficult for someone who was not from the region to fully appreciate. Mark does this nicely, providing both a history and a perspective that is written both well and compellingly. Eskerrik asko, Mark!