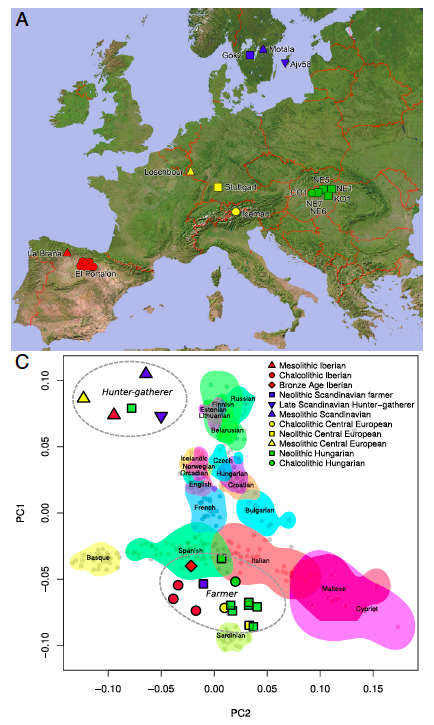 A few months back, a paper published in the journal Proceedings of the National Academy of Sciences of the United States of America (PNAS) (Ancient genomes link early farmers from Atapuerca in Spain to modern-day Basques) caused quite the stir on the Basque portion of the internet. The paper examined the genetics of various populations, including Spanish, Italian, Russian, and, of course, Basque, and compared those genetics to determine where the Basques came from. Many reports had sensational headlines like Cave DNA unravels riddle of the Basque people, Ancient DNA cracks puzzle of Basque origins, Basques Linked to Ancient Iberian Farmers, Basque ancestors were farmers, Mystery of Basque origins solved, Science Seeks Answers to Riddles of the Mysterious Basques, and Unusual ‘relic language’ comes from small group of farmers isolated for thousands of years.

To the best of my understanding, what the paper claims is that the Basques are most closely related to European farmers from the Atapuerca region of northern Spain. My interpretation of the previous theory was that the Basques were a remnant of the paleolithic populations of Europe, the hunter/gatherer Cromagnon peoples effectively. What this new paper says is that, no, the Basques are more closely related to farmers that arrived in the region during the Neolithic or Chalcolithic periods of time, not the earlier Mesolithic period.

However, the Basques still exhibit genetic differences with their neighbors, such as the French and the Spanish. Rather than being isolated since stone age times, the authors of this study attribute these differences to more recent isolation. After the farmers spread through Europe, the ones that would eventually become the Basques were isolated from the Caucasian/Central Asian and North African populations and the later Moorish influence in Spain. While their neighbors intermixed with these populations, they did not.

The paper also claimed that this shed light on the origins of the Basque language. At least to me, that isn’t so clear. While the genetic history of a people might correlate to some degree with language, it is not an absolute connection and the language that those farmers-who-became-Basques spoke could easily, it seems to me, have even older roots. While these new genetic studies provide valuable new insight into the history of the Basques from a population point of view, they can’t directly inform the linguistic history. The paper admits this, saying that the farming populations that migrated to the area and mingled with the local hunter-gatherer populations to form what would ultimately be the Basques “could have” spoken some non-Indo-European language, but what it was, they don’t know. And they may have brought it with them, or it could have been there already.

That said, I am certainly not a geneticist and I would love to hear from people who are actually in the field and might be able to provide even more detailed commentary on this paper. It seems to have fascinating and important implications, but I would certainly like to know more.

One thought on “New insights into the origins of the Basques”