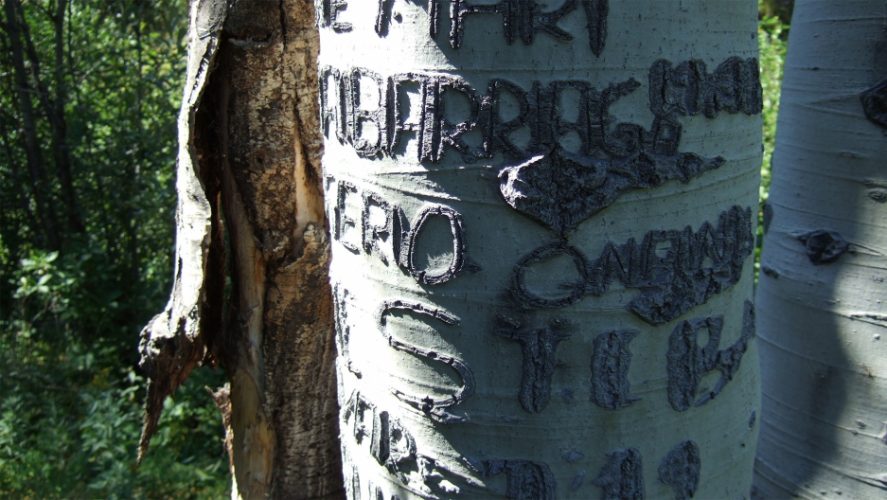 A lot of the men that came to the United States were barely more than boys. Suddenly, they found themselves alone in the hills of west, tending herds of sheep with little more company than their dog. It’s no surprise, then, that many of them left their signature behind. Tagging the trees like urban kids do with their paint, they left behind their names, doodles of animals, and even drawings of people, some of them a little risqué. One of the last times my dad was in the hospital, my wife sketched a curvy outline on the white board in his room, asking him if he had ever drawn anything like that when he was out in hills. With a twinkle in his eye, he laughed, and said “Their boobs were bigger.”

Something I should have posted about a while ago, there has been a exhibit about these arboglyphs — or tree carvings — traveling around Nevada. The last day seems to have been yesterday, unfortunately (sometimes, real life gets in the way too much to keep things up to date). The exhibit, entitled “Mountain Picassos” and spearheaded by Jean and Phillip Earl, highlights the history of these carvings and provides history about the herders that carved them, was sponsored by the Nevada Arts Council and the Nevada Historical Society.

Here is a nice video that introduces these arboglyphs:

And, now the bad.

Trees were never a great medium to preserve art. They die, they get cut down, they get burned down. And, it seems, climate change is exacerbating the problem. Climate-changed induced drought is causing trees to die faster. As detailed in this story by PRI, aspens are being hard hit by climate change, and at least one study says that half of the aspens will be gone by 2060. And, with them, so will go the history of the Basque sheepherder that they capture. This gives an even greater imperative to document these trees and their stories before they are gone forever.