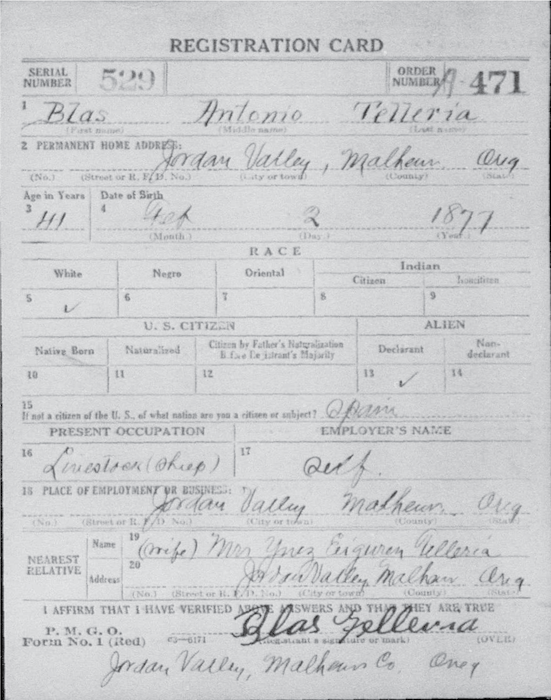 During the Christmas holiday, which we spent in and around Boise visiting grandparents, we made a stop at the Basque Museum and Cultural Center. After making our yearly pass through the gift shop, we took a stroll through the museum itself and found the newest exhibit on Basques in the military. The goal is to recognize Basques who have served, both in the United States military as well as in those in Europe, in various conflicts around the globe, to honor their service and sacrifice. They already have multiple exhibits and stories highlighting the service of various Basques. 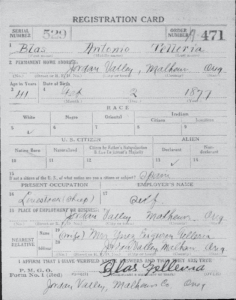 After touring the museum, we stopped next door to see Patty Miller. As we talked more about the exhibit, its origins, and the efforts they have been taking to put it together, she said “hold on a minute” and grabbed a big binder of scanned records. You see, as part of this effort, they have been going around to the various government record centers in the surrounding areas and scanning records pertaining to the project. In this binder was the draft registration card of my great-grandfather, my namesake Blas Telleria! It was pretty awesome seeing his signature on this form — he certainly had better penmanship than I do!

In one of those nice coincidences, just a few days later I saw a link on Facebook to a calendar of Basque Heroes of World War 2, a collection of 12 soldiers from both the US and Europe, summarizing their accomplishments during the war. The calendar was put together by Memoria Bizia, the Sancho de Beurko Elkartea, and Fighting Basques.

If you are interested in contributing, the Basque Museum and Cultural Center would love to hear from you. Let me turn it over to them for the details on how you can contribute:

Abertzaleak/Patriots: Sacrifice & Honor – A Story of Basques in the Military Near & Far

The Basque Museum & Cultural Center opened its newest exhibit in November, 2017, which features Basques who served or are serving in the United States, Basque, French, and/or Spanish military. Our hope is to recognize all submissions through an interactive portion of the exhibit that will be viewed by literally thousands of visitors and students who tour the Museum each year. The Basque Museum would like to be able to represent as many Basques from as many states, countries and branches of the service as possible.

If you are Basque or of Basque decent and have served or know of a relative who has served in the military, would you please take a few minutes to gather the information to contribute to this project? The Museum currently has information and photos on nearly 400 veterans or active servicemen and women.

Please include the following information:
Basque Veteran Submission: Full name of soldier, branch of military, rank if known, and time-period or conflict served. If you have a photo of the military personnel in uniform, that would be wonderful, or a civilian picture from that time-period.

PLEASE CONTACT Amanda Bielmann (208/343-2671); amandab@basquemuseum.eus to include information in this exhibit/project.

We would like to thank our generous sponsors for making this exhibit a reality: