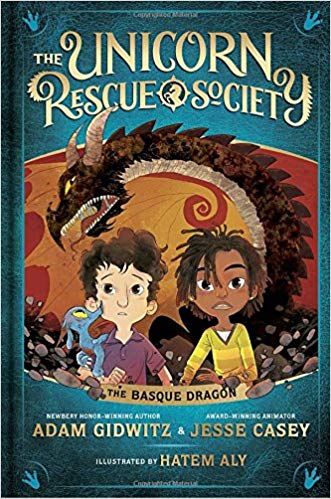 There aren’t too many references to the Basques in popular culture, particularly for kids. So, when I saw The Basque Dragon, part of The Unicorn Rescue Society series of books by Adam Gidwitz, Jesse Casey, and Hatem Aly, I jumped on the chance and got it for my daughter. The premise of the series, as a whole, is to explore rare mythological creatures and protect them from two menacing corporate brothers. In this particular case, the heroes — two kids named Elliot and Uchenna and their mentor/teacher Professor Fauna — must travel to the Basque Country to save a herensuge — a Basque dragon.

My daughter and I read this together. Let me start with my daughter’s thoughts:

This book is about  two kids, Elliot and Uchenna, that get invited to join a secret organization by Professor Fauna, a teacher at their school. The society is called  The Unicorn Rescue Society. They travel to the Basque Country in order to help one of the professor’s many friends, Mitxel Mendizabal, find his lost herensuge (dragon). With the help of Jersey (a Jersey Devil), they discover that the Schmoke brothers, a dreaded enemy of the professor’s, have taken the herensuge. In order to save the herensuge, they have to venture into a deep cave with a dragon on the loose. Is The Unicorn Rescue Society up to the task?

I enjoyed this book, it was full  of adventure. I also liked learning some Basque words while I read. I also learned about some mythical creatures, like a Jersey devil — I didn’t know what that was. I would recommend this book to anyone who likes “mythical” creatures. Would you dare enter a dragon’s cave? Save a Sasquatch? Or talk to a Sphinx? If so, then you belong in The Unicorn Rescue Society.

This was a quick read with nice illustrations to capture the imagination. The characters, for such as short book, are fleshed out nicely with their own personalities. For me, the best part was listening to my daughter as she discovered various aspects of the Basque Country: some of the words (kaixo, baserri, pintxos, herensuge), the places, and names (Mitxel Mendizabal) gave the book enough of a Basque flavor to make it feel special. My daughter quickly grabbed a notepad and started making her own Basque word list based on all of the words she encountered in the story, including a phonetic spelling. She was excited to see something about the Basque culture in a book aimed towards her. I was excited to see her so excited. I also learned something. I didn’t know the herensuge had the powers described in the story. I’ll have to check it out and learn more.

The authors aren’t Basque themselves, but, judging by the notes, they consulted heavily with the Basque community of Boise to get the details right and to help add some extra sense of Basqueness to the story. For such a short story, they do a nice job of capturing that feel. In the Basque Country, the story focuses on a rural setting, so while the big city is mentioned, it isn’t where the action takes place.

Overall, the story is still about the kids and their adventures, which just happen to take place in the Basque Country, so the story isn’t dominated by Basque culture and references, but it still has enough to give some Basque flavor and, maybe, pique my daughter’s interest in exploring the Basque culture more. That is, it isn’t a heavy-handed, in your face exposition on Basque culture, but is rather a subtle but nice introduction to some aspects of the Basque Country. I like that the authors chose a little-known corner of the world to focus this story on. Clearly, the series is meant to capture the imagination of world folklore and mythology and the authors hope to have many books in a long series. That they quickly visit the Basque Country instead of the heavy-weights of mythology speaks to their interest in exploring diversity.