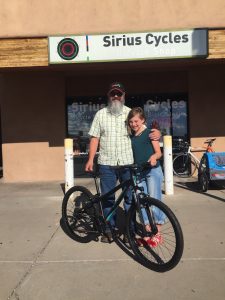 Our daughter is growing up fast and it was time to upgrade her bike. We stopped at the local bike shop (Sirius Cycles, owned by this great guy from Panama who is one of the few people I have met that has known a Blas…) They are a small shop, but with a lot of bikes, most hanging from the ceiling. We’ve been in there before and my eye is always attracted to the bright orange ones, the ones with “ORBEA” splashed across the frame. But, the adult bikes are beyond the price I want to pay, especially considering how little I ride. So, it was a pleasant surprise when he had a child’s model, from last year, that was discounted to a reasonable price. My wife and I jumped on the chance. We now have an Orbea in the family! 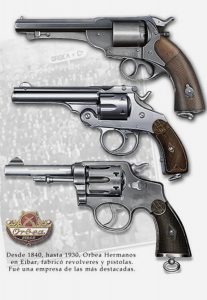 Orbea is a bike manufacture centered in Mallabia, in the heart of Bizkaia (my dad’s sister-in-law lives there). Mallabia can’t be bigger than a few thousand people (Wikipedia says 1,135). And yet, out of this small town has arisen a world-famous bike company that sells bikes all over the world. And, that isn’t the most interesting thing about the company.

Orbea began in 1840 in a nearby town, Eibar, as a gun company. Started by three brothers, they sold handguns to governments that were emblazoned with the slogan “Orbea Hermanos.” However, after World War I, the demand for guns in Europe dropped, a consequence of the fatigue from war. Orbea had huge institutional expertise and experience making steel tubing for guns and, adapting with the times, they shifted focus. What else could be made with steel tubing? In 1930, they abandoned the gun business and shifted towards other products, including baby carriages, though their focus was bicycles. They gained notoriety when Mariano Cañardo, riding an Orbea bike, won a stage in the Tour de France.

Yet, even this transformation is not the end of the story. Orbea underwent a second massive transformation, not in what they made, but in how they were operated. The Basque Country is famous for the Mondragon Corporation, a group of worker-owned companies centered in the Basque city of Mondragon. Near the end of the 1960s, with the Spanish economy in dire straights, Orbea followed suit. The workers came together and purchased the company, making it a worker-owned cooperative as well. 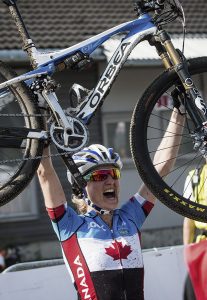 Since then, they have diversified from road bikes — the kinds that are featured in races such as the Tour de France — to mountain bikes and now even electric bikes. Their global presence is highlighted by the fact that the mountain bikes are designed in the United States and built in Asia. Today, their bikes are used by riders all over the world. Their riders have won stages in the Tour de France, medals at the Olympics, and championships at the Ironman Hawaii triathlon.

The Orbea website says “The road of the cyclist has climbs, descents, plains, false flats, endless routes, unexpected curves.” The same could be said of Orbea itself, its curved and tortuous path through history. Shifting dramatically in both mission and ownership, Orbea has weathered the storm and come out stronger than ever. Maybe I’m biased (just a little), but the story of Orbea is one of perseverance in an ever-changing global market. They are a role model for how a company can and must adapt to an evolving world economy. There are lessons to be learned by other companies, by other parts of the world, where the old business models simply don’t work any more. Companies, like people, like cyclists, must adapt to the curves in the road. Orbea has been extremely successful in doing just that.

Some day, maybe if I can get off my butt and start getting some more exercise, I’ll find the justification for getting myself an Orbea. For now, I’ll live vicariously through my daughter’s bike. I’d certainly like to visit the Orbea headquarters in Mallabia, to check out their design and fabrication process. Maybe next time I visit my aunt…

One thought on “Orbea, the Basque bike company”