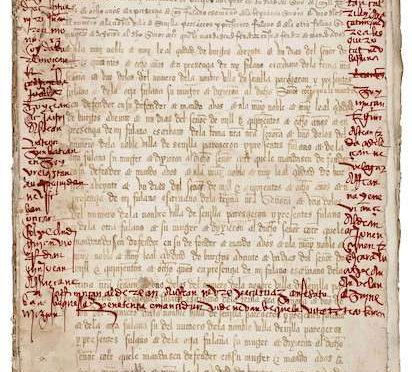 One of the challenges with studying and understanding the origins and evolution of the Basque language is simply that it is only until relatively recently that it has been written down. Thus, whenever a new fragment of Euskara is discovered, it is a big deal. While the oldest known phrases in Euskara data back to 950 or so, the oldest text is a letter written in 1537 by the then-bishop of Mexico. Or, it was the oldest, until now.

My sweet beautiful beloved
you pity me

Having me so “zulez”,
How did you make me fall in love
with that sword in hand?

You take me with your hands
from here to there

I will forgive you, squire,
I have not used it to kill a person
save the young man

My love left me
I usually have the first one
inside my heart.

I got up early in the morning, one day a week
one day a week, and Monday morning
my dear “belagai,” broke in front of me
in the “bia” that I did not want, next to where you were
the great blow shook me, in the middle of the heart.

I was going to church when I was hit
I got down on my knees, in front of the altar
[to] confess my sin, as I did
she gave me penance, as I should.

Meanwhile, here I am (you got me)

4 thoughts on “Basque Fact of the Week: A New Poem Written in Euskara Discovered”