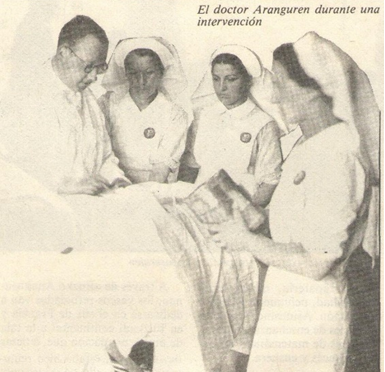 A Basque doctor without borders

Gonzalo Aranguren Sabas (Bilbao 1903-Hondarribia 1974) was a man of many qualities worthy of mention and whose memory is his best legacy, not only for all his descendants but also for all those who associated with him in the Hospitals of Bizkaia during the civil war and the bombings of Gernika, at the Hospital de la Roseraie in Biarritz during his exile in France, or in Venezuela where he became a well-known Doctor within the Basque community in Caracas.

He studied medicine in Madrid and worked at the Basurto Hospital in Bilbao. When the Spanish civil war reached Bizkaia in 1937, the Basque Government entrusted him with the Directorate of the Blood Hospital of the Basque Army in Amorebieta, Bizkaia.

At the Amorebieta Hospital, they treated all of the wounded from the Otxandiano fronts and later from the bombing of Gernika. But in the face of imminent defeat, he received the order to continue his work in Biarritz, Lapurdi, in France, as the head of La Roseraie Hospital, with the aim of treating all the gudaris wounded on the battle fronts.

When Franco’s troops invaded Bizkaia in May, the priest of the convent where the Amorebieta Hospital had been installed, Father Urtiaga, was shot for collaborating with the separatist Reds. Dr. Gonzalo Aranguren, before leaving the convent to transfer the war wounded to France, warned the priest of the danger of staying in the convent and offered that he accompany the doctor and his team to France. The parish priest did not think that the cruelty of the other side was of such caliber,and declined to leave, but the reality is that he was shot on May 19.

According to one of the first reports from the hospital, dated January 3, 1938, “commissioned by the Government of Euzkadi from the Directorate of La Roseraie in order to attend as much as possible to the unfortunate mutilated and wounded from the war who could be evacuated from Euzkadi and Santander, as well as from Asturias, which in the number of TWO HUNDRED FORTY we have attended and are attending, we set up a Hospital with an operating room and sterilization sanitary material and two treatment rooms. “

They not only tried to alleviate the dire situation of the wounded soldiers but also created workshops so that the mutilated gudaris, once cared for, could somehow reintegrate into productive life. For this reason, they created the following workshops, according to the Health Inspector Dr. Luis Bilbao in his report of February 27, 1938:

“Orthopedics. Where artificial legs are being made for the mutilated under the supervision of the Orthopedic Dr. Musatadi

“Carpentry. Where all the work of the center is done and those suitable for it learn the trade.

“Espadrilles. Where benches and a work table have been installed, where they have begun to manufacture espadrilles and several mutilated suitable for it are learning the trade.

“Shoe shop. Where four work teams have been installed and in principle they are repairing all the Center’s footwear and several mutilated suitable for this trade are learning the trade. When they learn what repair to make, they will begin to build. The direction of this workshop is run by a war-wounded man who was a shoemaker by trade and has been fit for it.

“Since February 15, they are given the following classes: primary instruction – there are four illiterates – French language classes, elementary mathematics, and Basque classes. “

All of this required a monthly budget of 100,000 francs, though sometimes the budget was exceeded by unexpected situations “due to the surprising expense of pharmacy 11,000 francs, and coal and light at 10,500 francs (months of December and January), and for the new chapter on Radiography and Electrotherapy ”.

The Minister of Health of the Basque Government, Heliodoro de la Torre, put all of the necessary means in place so that the mutilated gudaris had the best possible care under the circumstances. The repercussion of the work carried out was thanks to the great effort resulting from the collaboration of the medical staff, nurses, and the patients themselves in the workshops and in the choir. Aranguren was honored on different occasions for his great work in the direction of the Hospital.

In addition, the war-maimed formed a famous choir that sang in different places in the area.

Before the start of World War II, Lehendakari JA Agirre, the head of the Basque government in exile, unequivocally positioned himself: “Given the causes invoked and the methods used by Germany to unleash war, it is for us the war between everything that is worthy of being appreciated and all that deserves our condemnation.”

On June 27, 1940, German troops took possession of La Roseraie and replaced the ikurriña with the swastika. During the course of several different trips, many of those Basques from the hospital and beyond went into exile in Venezuela, which meant a trip of weeks to an uncertain and unfamiliar destination but which often ended with welcome for many Basque families.

Upon arriving in Venezuela, Dr. Aranguren became involved in the creation of the Basque Center in Caracas where he held various positions. He also continued devoting himself to his passion for medicine, being the recipient of the Gold Medal of the city of Barcelona in the state of Ansótegui.

After decades in exile, he finally returned to Bilbao where he founded a private clinic where I was born. He spent his retirement in Hondarribia where he rested overlooking the same river that he had to cross during the Civil War to manage The Roseraie Hospital in Biarritz.

4 thoughts on “A Basque Doctor Without Borders”