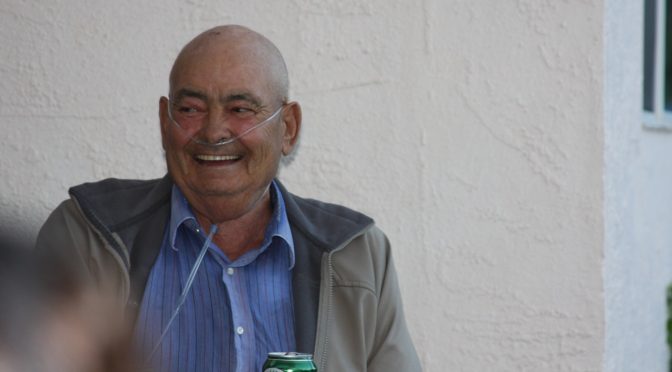 Dad died seven years ago this Thanksgiving. I miss you, dad.

When I was a kid, seemed to be always working. He wanted to be at the haystack by dawn, so he’d get up in the dark of night, sometimes waking me or one of my brothers to go with him, and head out while the rest of the world was sleeping, driving hours to beat the sun. And he usually kept going until the sun set, moving as much hay as he could during the daylight hours. When he wasn’t working, he was either hanging out with friends or indulging in some TV. His favorite shows were things like Little House on the Prairie and Walker, Texas Ranger.

When I was young, he never really had any hobbies. He worked, he spent time with his friends, he maybe watched a little TV. But he didn’t have hobbies like most of us do. He didn’t read. He didn’t draw or paint. He didn’t play or watch sports, beyond the occasional boxing match. He didn’t even do anything like woodworking, though his childhood dream had been to be a carpenter. He had that in common with a lot of the Basques – and I’m guessing most other immigrants – who came to the United States seeking opportunity. They came to work, and work was about all they knew. And because their work was physical, they never really found any non-physical activities to fill their time. When my dad’s body started failing him, that was his biggest challenge. All he had ever known, from the time when he was a kid, was physical labor. Doing things with his hands. The only advice he ever gave to me was to be sure I had a job with an air conditioner, so I didn’t have to work like a jackass like he did.

His one hobby, if you can call it that, was his garden. It was more like his passion. His garden was his pride and joy. He had a large garden filled with many of the typical crops. Things like tomatoes and sometimes corn. He grew a lot of garlic and would spend many hours braiding them up and giving them to friends and family. But, the peppers… the peppers were what he really loved. His garden was filled with hundreds of pepper plants. Some bell peppers, but mostly txorixeros. All summer long, he would pluck those peppers and fry them up. Our house was often filled with the aroma of cooked peppers.

Which I hated! I hated the smell of peppers, almost as much as I hated how they tasted. Dad had this monster garden and he had to fill it with the vilest of plants. He always laughed at me, teasing me; “chorizos have peppers in them,” he’d say, “why do you like those?” I’d just shrug. “I can’t taste them in the chorizo.” But I could taste them in everything else. Mom and dad would reuse the oil from cooking peppers for other things and I could always tell. If they cooked eggs in that hideous pepper-infused oil, I knew. He’d often make fried potatoes, cooking them in the same oil he’d used for his peppers moments before. My wife, Lisa, says those were the best French fries she has ever had.

When I got older, dad did get a few new hobbies, but only once I’d gone off to college. Maybe not surprisingly for a Basque, they mostly revolved around food, and recreating the food of his childhood. He began making his own chorizos. These weren’t the pretty things we’d get from Gem Meat Packing. They were lumpy. There were larger chunks of fat in them. They were a deeper color of red. But they had flavor… much more flavor than the store-bought ones. Maybe it was dad’s peppers. He once sent me a bundle to my dorm at the University of Idaho. I laid them out on my counter to dry and had a small microwave to cook them in – not as good as frying them, but good enough for me. We had a bunch of Hawaiian students in the dorm and they’d always look at me funny when they walked past my room. They’d ask about my “turtle shells.” But, it was really cool having this taste of home – I never minded having my eggs cooked in the chorizo grease!

A few years later, dad also started making his own hams. Whenever I would visit home, he’d insist on sending me off with a whole leg. I always begged off as I knew I couldn’t eat the whole thing before it went bad. But, really, it was excellent. I got addicted to jamon serrano when I lived in the Basque Country. For me, it’s almost like candy – actually, I’d rather have a plate of jamon! (Though, as Lisa will attest, I never turn down a dessert (or three) when we visit Euskal Herria…) Dad made great hams. Once in a while, they came out just a little too salty, but for the most part, they were excellent. A few times, I acted as a middleman between him and a Spanish colleague at work who wanted a whole leg after tasting a few slices. Dad kept his salt box in the garage. He had his recipe – one day in the salt for every pound of meat, plus a bit more (thanks Tony for catching my error!)– that he stuck to religiously. And he’d rub them down with pulp from those damn peppers again. Red ones, this time. I couldn’t taste the peppers there either.

I never really learned from dad how to make jamon or chorizo. Once, I went with him to a friend’s barn where a bunch of Basques got together to make a big batch of chorizo. I mostly watched and took pictures. For a while, my brother got into making his own hams, and he did a good job with them too. I just never sat with dad long enough to pick up the process. By the time he started making hams, I was already gone, off making my own life.

Hell, I never even really learned how to cook those damn peppers. I tried once, not so long ago, hoping to make some for friends. I don’t know if I didn’t have the oil at the right temperature or what, but they turned out to be a disaster. Dad would have gotten a kick out of that.

Thanks to Lisa Van De Graaff for encouraging me to record dad and his stories when I could. Lisa took the photo at the top.

3 thoughts on “Remembering Dad by Telling His Stories”