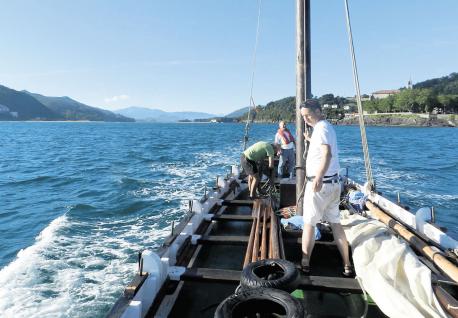 Gontzal Aranguren is an old friend and roommate from my days in Seattle (old in the sense that we’ve known each other a while, not saying he is an old man (baina, gizon zaharra bada…)) Since he returned to the Basque Country, he has gotten involved in a number of very interesting and very different projects. His latest takes him onboard the Brokoa, a replica of a XIX century boat that was used to move iron along the Basque coast. They are recreating one of these voyages, from Portugalete to Hondarribi. Gontzal’s uncle is coordinating the event and asked Gontzal to be involved (that is Gontzal striking a pose in the foreground of the photo).

Recently, a XV century Basque ship was found in the harbor of Newport, Wales, and so a city councilor and a journalist from Newport were invited to join the crew on this adventure. They have written about their experience in the South Wales Argus, including a diversion down the river Oka to Gernika and the Gernika Peace Museum, a memorial to the horrors experienced by the townfolk of Gernika, and neighboring towns (I’ve heard that my dad’s hometown of Gerrikaitz was also bombed, though, visiting there, I can’t imagine what lead it to be a target beyond it being a crossroads between several other cities), during the Spanish Civil War.

Gontzal is preparing his own write-up of the adventure and when he posts it online, I’ll add a link to it here.