Christine Echeverria Bender is a prolific author, focusing on the fictionalized adventures of Basques during the Age of Discovery. Her novels have touched on the first circumnavigation of the globe (completed not by Magellan, but the Basque Elcano) and the role of the Basques in Columbus’s voyages across the Atlantic. One of her most recent novels, The Whaler’s Forge, describes the Basque sailors who crossed the Atlantic, most likely long before Columbus ever did, in search of better hunting grounds for whales. The novel delves into the relationships that the Basques likely had with the Native Americans they encountered. In this interview, Christine takes some time to provide some background on her novel, some of the choices she made, and the research she conducted as part of her writing process.

You can visit Christine’s website and purchase her novels here.

Buber’s Basque Page: As with your other historical novels, you explore an era of Basque history through the fictionalization of the life of a Basque from that time. This time, it is a time during which relatively little is known in the historical record, the era of the Basque whalers off of the Canadian coast. What inspired you to choose this era and how did you do your research about the Basques in Canada? 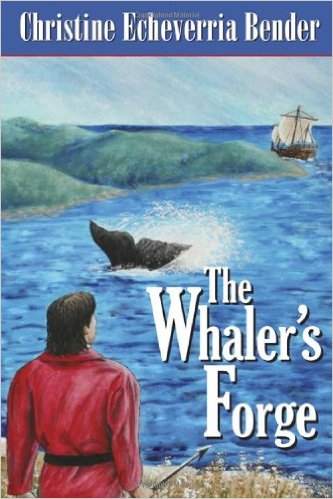 Christine Echeverria Bender:  When I began researching the question of when Basques first arrived in North America I came across the discovery of the sunken galleons and whalers’ graves in Red Bay, Labrador. Just imagine the first ships’ crews landing there. It’s highly unlikely that those men had ever heard of moose, beavers, grizzlies, or the native Naskapi people, so their first encounters must have been startling. The early whalers also faced the extreme dangers of their trade while they battled the sometimes brutal climate conditions. The more I learned, the more determined I became to tell this story. To research the Basque whalers as well as the northern right whales I traveled to five Canadian provinces. I’m grateful to have received a grant from the Idaho Commission on the Arts and the National Endowment for the Arts to aid in my research. A year later I was fortunate enough to join a team of archeologists from the Smithsonian Institution on a dig at Hare Harbor, a Basque whaling site in remote eastern Quebec. Many of the artifacts we found, from Basque and Innuit people, are reflected in The Whaler’s Forge.

Buber’s Basque Page: Without giving away too much of the plot, your novel spends as much time with the Native Americans as with the Basques themselves. What motivated this choice? How were you able to so vividly describe a people who have even less historical record than the Basques?

Christine Echeverria Bender:  The archeologic record, including finds from the Smithsonian digs, strongly suggests that the Basque whalers and native people lived and worked closely together. I felt the story would be less full, less true if I had not depicted this intimate relationship. While investigating the Naskapi, I found sources from European trappers and explorers who had lived with the native Canadians before their ways of life had all but disappeared. I also studied scientific evidence of the flora and fauna of the time, along with climate conditions, to help me describe their world.

Buber’s Basque Page: Your main character, Kepa, is a tormented soul with a complex past that influences his actions in your novel. What was your inspiration for Kepa? Is there a historical character you based him on or is he a creation entirely your own?

Christine Echeverria Bender:  Kepa is my own creation. I wanted him to have a past that told a great deal about his people and his time, so I chose his inate nature, education, hardships, and triumphs carefullly.

Buber’s Basque Page: I understand that you spent a lot of time on location at archeological sites to research your novel. How was that experience? What was the most surprising thing you learned during your research? 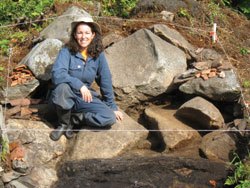 Christine at the dig site, from an interview she did for Women’s Adventure Magazine.

Christine Echeverria Bender:  The experience was unforgettable in so many ways. Our team lived on a small boat, so we got to know each other very well in a short period. I worked with the diggers on land while others dove offshore, and all of us found amazing artifacts. In addition to finding evidence of just how closely the Basque whalers and indigenous people lived together, sometimes occupying the same dwelling, we discovered that the buildings had been burned to the ground at least once. In a charred support beam I found a deeply embedded musket ball, which implies that the site was fired upon before being destroyed. This raised more questions than answers, such as when, by whom, and why the shots were fired.

Buber’s Basque Page: I imagine that, in some general sense, the Basque history of whaling is at least somewhat controversial, with the overall small populations of whales world-wide, a consequence of the world’s history of whaling. Did you run into any particular resistance or surprising encounters because of your subject matter? How has the subject of your novel been received?

Christine Echeverria Bender:  Most people I’ve talked with have been intrigued by this very early era in whaling, and wanted to know more. Although some folks asked if the Basques are to blame for the current low population of whales, I’ve explained that the accounts from this time period describe whales as so numerous that the ships had to nudge them out of the way to reach their anchorages. They also describe the number of whales visible from Red Bay’s harbor in the thousands. The Basques undoubtedly reduced these numbers at the time but it was the whalers of the 19th and 20th century, with their more modern equipment, that made far great reductions to the whale populations. As a matter of fact, recent DNA research conducted on northern right whale bones by Dr. Brenna McLeod of Trent University, concluded that it is highly unlikely that Basque whalers decimated the species. When I was speaking about the Basque whalers in Halifax, Nova Scotia last summer, I was delighted to discover that Dr. McLeod was in the audience, and I was able to discuss her research with her in person. Overall, the subject of The Whaler’s Forge seems to have captivated readers because it is a little-known and enthralling episode in our continent’s history.

Buber’s Basque Page: Based on your research, what is your understanding of the relationship that the Basques had with the Native Americans they encountered?

Christine Echeverria Bender:  The relationship was generally very positive. Because they worked and lived so closely together it’s hard to imagine that there wasn’t mingling between the whalers and the native women. In Red Bay, along with the remains of about 135 whalers, excavators found several skeletons of children around the age of 12. These might have been Basque cabin boys, or they might have been half-Indian offspring of the whalers. DNA testing has yet to be conducted that might answer this question. There are accounts of the Basques leaving cabin boys with the natives over the winter so these children could learn their language and customs, and then teach the whalers who returned the following spring. This certainly implies the existence of a trusted bond. Also, the native tribes evidently competed, even fought one another, to hold the best working and trading connections with the Basques. 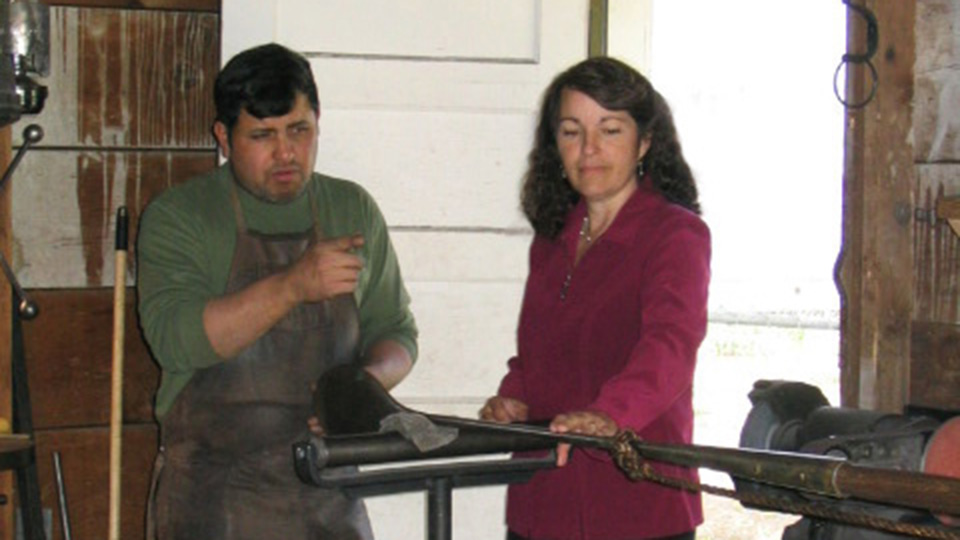 Buber’s Basque Page: Just a curious point from my point of view: when I’ve tried doing genealogy research into my Basque roots, all of the names I’ve found back several centuries have been Spanish. Yet, all of your Basque characters have names that are Basque. How widely used were Basque names back then?

Christine Echeverria Bender:  Basques began trading and exploring more frequently with the Spanish in the late 15th and 16th centuries and some of our people were motivated to learn to read and write in that language, which very likely influenced professional names as well as the naming of children. The spread of Christianity into the Basque Country may have had an impact as well, with children being baptized with Spanish saints’ names. The Whaler’s Forge is set in 1364, at a time when I believe the traditional Basque names were still prevalent.

Buber’s Basque Page: One very interesting feature of the Basque interactions with the Native Americans was the development of a pidgin language to facilitate trading. You mentioned how Basque cabin boys were left on the American shores to learn the local languages. What else did you uncover about the linguistic interchange between these cultures? Did any Native words make their way into Basque?

Christine Echeverria Bender:  The pidgin that developed between Basques and the Algonquian and Inuit people all around the St. Lawrence is believed to be the oldest cross-Atlantic pidgin language in North America. Surviving words seem to have migrated from the Basque side to our continent rather than the other way around. An example is the word “caribou”, which was roughly translated from the Basque words kari and burdun to mean “destined for the roasting pit”. Among other experts on this topic, Peter Bakker of the University of Amsterdam wrote an article called, “The Language of the Coast Tribes is Half Basque”.

Buber’s Basque Page: In your novels, you’ve touched on the first circumnavigation of the world, the Basque whalers in the Americas, and Columbus’ adventures as well. What is next for Christine Echeverria?

Christine Echeverria Bender:  My most recently publshed novel is Aboard Cabrillo’s Galleon, telling of the 1542 voyage of discovery up the California Coast. Right now I’m working on a screenplay based on a to-be published novel about the Idaho City gold rush at the height of the Civil War. In the future I hope to write about the pre-historic Basques, perhaps venturing with them on their first voyage to North America during the Ice Age.