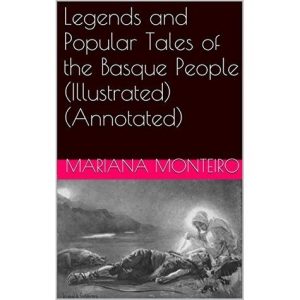 Relatively, as compared to the other peoples of Europe, the Basques converted to Christianity rather late. While Christianity seems to arrived in the region in the 4th or 5th centuries, it didn’t really take hold amongst the population until roughly the 12th or 13th centuries (Wikipedia has a summary of what is known and debated regarding this topic). However, whenever it happened, when the Basque converted, they did so with fervor. As a consequence, there is much that isn’t known about the pre-Christian beliefs and religion of the Basques. Unfortunately, what there is hasn’t made its way into English. Thus, as an English speaker, it is always a pleasure to stumble across gems such as Mariana Monteiro’s Legends and Popular Tales of the Basque People. Originally published in 1887, it has numerous stories that mix pre-Christian beliefs with Christian symbolism and, most interestingly, historical elements. 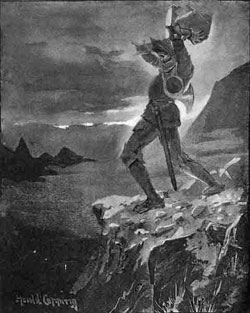 Some of the stories are familiar. I’ve read similar tales in other books. There is the story of a boy that must overcome certain ordeals to find his love. But, even so, there are unique elements here. In one story, the boy is protected from evil by his dead mother, who comes back in the form of the Arguiduna: “When the ‘Arguiduna appears, the graves are opened, and the corpses show their fleshless faces, and fling to each other this nocturnal moth, like tennis players throw with the racket the ball to one another. It is the sport of the dead during the first hours of the second of November.” 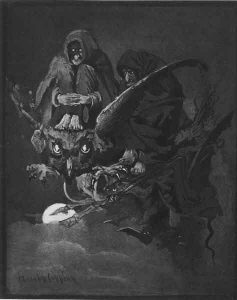 And there are “typical” tales of witches that “help” others with their quests for love. The devil also makes a frequent appearance in these tales, sometimes outwitted by a humble boy. There are stories of love and of revenge, of envy and of betrayal. But, perhaps most interesting to me were the elements of history that were woven throughout these stories.

There are stories of feuds between Basque families and the tragic happenings of crossed lovers from those families, but set in the backdrop of war, of the Basques fighting against a foreign enemy. And, in the course of this story of war and family feud, there are elements of the supernatural, when a soldier is saved by the Maitagarri. These elements of historical context abound throughout the stories, often with little more said, but in some cases, with significant, but tantalizingly insufficient information.

For example, there is the tale of Jaun Zuria, an Irishman, who is banished because, during a hunt, he accidentally kills his father. He is sent away in a boat, and comes across the land of the “Cantabrians, the race of giants which, five centuries earlier, Rome, the mistriss of the world, had been unable to vanquish despite all her power.” He is taken in by Lekobide, the chieftain of the Eskaldunac. “Beyond the hierarchy of virtue and of intelligence and of age, there is but one hierarchy in the land of the Eskaldunac. The Eskaldunac elect a chief who is ever ready to lead them to the combat whenever the stranger invades their free land; and this glories title they bestowed on Lekobide.” Later, in defense of his adopted country, Jaun Zuria becomes the first Lord of Biscay.

Various superstitions also arise in these tales. In one, it is said that the left hand of a child, if severed during sleep and wrapped round with curls of its own hair, became an amulet which would protect against danger. There are also traditional Basque elements such as the irrinzi, the fierce and terrible war-whoop of the Basques.

However, it is these historical elements that most intrigue me. There are many in these tales. A few more include:

These are just some of the references to historical events or customs or activities that occur in these tales. I’ve tried to search online for some of them and, so far, have found very little to add. I’m not sure if it’s because the spellings have changed, or there simply isn’t much in English, or maybe these references have since become obscure.

In any case, if anyone knows where to learn more about these topics, I would be very glad to hear from you!