The big news out of the Basque Country is that ETA, Euskadi ta Askatasuna, who had declared a ceasefire in 2011, has officially disarmed. 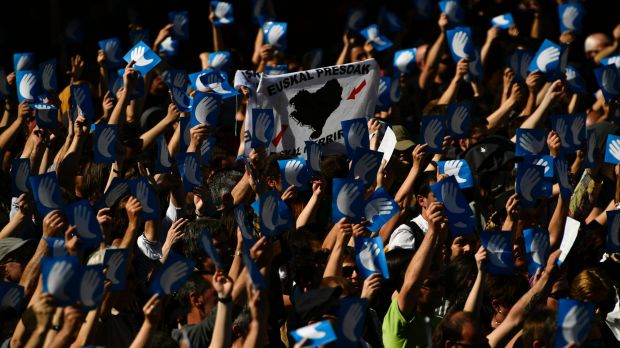 ETA grew out of the resistance to Franco’s dictatorship and disaffection with the economic and political realities of the late 1950s. They changed the political course of Spain when they assassinated Luis Carrero Blanco. Since then, they have been a constant part of the political discourse in the Basque Country. Over this time, 800 people have been killed at the hand of ETA militants. At the same time, a number of people have been killed by anti-terrorist efforts such as the GAL in Spain. It has been a long and bloody conflict.

During my various visits to the Basque Country, I’ve directly seen the result of just a few actions by ETA. During my first visit, in 1990-91, a bus was burned in San Sebastian’s Parte Vieja, a part of the kale borroka that was part of the bigger efforts of ETA. A few years later, after French authorities had arrested various ETA members in France, the Renault dealership in Ermua was firebombed. The most surreal encounter I even had was in a bar in the Parte Vieja. I was with another Basque-American and, when one of the clearly very drunk patrons learned of our Basque ancestry. He was very excited by the prospect of new people joining the cause in fighting against Spain. We finished our drink and escaped to the next bar as soon as we could.

History has yet to evaluate the final role and impact ETA has had on the history of the Basque Country and Spain. They certainly changed the course of events in Spain. At the same time, the Basque Country has existed under a cloud of violence for many years, a cloud that impacted tourism and development.

There has been a lot of discussion of both the actual surrender of arms and the place of this event in the broader context of current reality of the Basque Country:

One thought on “ETA disarms”