It has been widely reported and assumed that the Basque language played an important role in the US activities in World War II. I even have a page about this here. However, as Pedro Oiarzabal and Guillermo Tabernilla find, this is myth of Basque history.

Myth debunked: No such thing as “Basque code talkers” 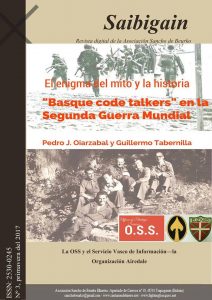 For nearly seven decades, many have believed, and many academic and non-academic publications support the belief, that the Basque language, Euskera, was used during the Battle of Guadalcanal in the summer of 1942 as a coded language to transmit key messages for the landing of the U.S. troops. However, as sad as it can be to lose such a heroic and wonderful contribution to the war effort, the Basque language (in contrast to Native American languages such as the Navajo language) was never used by any of the American military branches during the Pacific Campaign.

After completing extensive research of the National Archives and Records Administration military and intelligence documents, our study deconstructs the story of the use of Euskera by the U.S. Armed Forces during WWII, formerly taken as a real historical event by the official Basque contemporary historiography. Moreover, the paper also provides historical context to explore the myth’s origin and its development, with special emphasis on the close relationship between the Office of Strategic Services (predecessor of the Central Intelligence Agency) and the Basque Intelligence Service, or Organization Airedale. To summarize, we did not find any evidence that corroborates the idea of the use of the Basque language by the American military forces during WWII. It is simply a myth.
Click on the link to download the article (published in the Spanish language) for free: “The myth and history riddle: Basque code talkers in World War Two. The Office of Strategic Services and the Basque Intelligence Service—the Airedale Organization.”