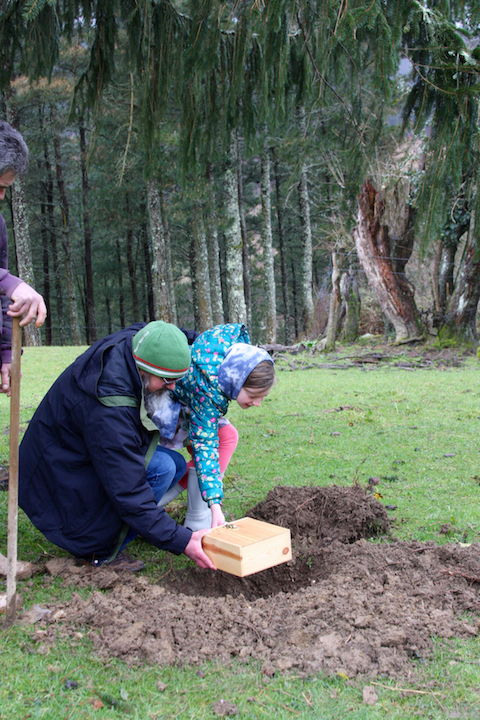 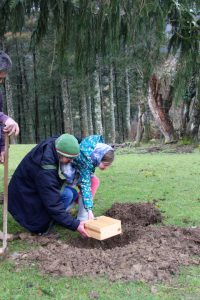 My dad left the Basque Country for the United States when he was 18. As many others before, including three uncles who were already in the US, he was looking for a better life. After three years of sheepherding, he went back to the Basque Country with enough money to buy an apartment in Gernika. But, the opportunity arose again to return to the US and make some more money. During this second contract, fate took a different turn. He met my mom, got married, had three kids, and stayed the rest of his life in the US.

Though he spent the vast majority of his life in the US, his head and his heart were, it seemed to me, always in the Basque Country. Not necessarily the Basque Country of today, with its punk music, its metropolitan cities, and its graffiti seemingly everywhere, but of the “good old days” of life on the baserri, the dances in the plaza, and the sports in the fronton. That was his gold standard of life, and nothing in the US ever lived up to it.

So, after he died, I really wanted to take something back to his home, back to the baserri. Something of him to take back home. A couple of weeks ago, we were able to do that.

My wife’s dad made a small wooden box that we filled with both small things of his, such as the belt buckle he often wore, as well as notes and recuerdos from us. My mom, my wife, my daughter, and I all put something in there. My uncle, my dad’s lone remaining brother, dug a hole under the apple tree they planted some 40 years ago, during Christmas, outside the family baserri. My daughter and I, surrounded by my uncle, my aunts, and numerous cousins, then buried the box with a few of our thoughts and memories under that tree. Returning something of my dad back to his home.

My own contribution was a little story about what I remember most about growing up and being with my dad:

I pick the rope off the ground, gripping it tightly in my hand.

I climbed a lot of these ropes when I was a kid. They held the haystacks together on dad’s truck. Sometimes, I climbed them just for fun, when his truck, parked on the street, loomed over the house, over the neighborhood. My short legs stretched and searched for the footholes that dad and his partners left in the stack. Reaching over the top was always the scariest bit, but, as I got older, that got easier too. We used to climb up and jump from the stack on one trailer to the other. I remember falling once, but now it seems like it would have been so high off the ground. Maybe it wasn’t me, maybe it was one of my brothers. Or maybe it was a figment of my imagination. I can’t remember.

When I went with dad on his runs, it was my job to climb up and unhook the come-along rope puller. After I freed the ropes, I’d either climb down the front, where I could get my feet on the wall separating the first trailer and the cab, or wait until dad unloaded enough hay for me to climb down.

I wrap the rope around my hand. With the five other men, I lift the coffin off the ground.

When I was a kid, dad and his partners loaded and unloaded the truck by hand, but when I got older, dad got a tractor and was able to load and unload by himself. I would still go with him sometimes, mostly to untie the ropes and give him some company. I no longer needed to climb those ropes, but, once in awhile, I still did. Most of the time, though, I would sit on the end of the hay grapple and he would lift me up to the top of the stack. Once I untied one trailer, he would  carry me over to the other. I’d untie that one and then he would lift me down and I would collect the ropes. Dad taught me how to weave the rope between my arms, in a figure eight, to bundle them up.

Once, during Thanksgiving break, or maybe even on Thanksgiving Day itself, we were driving along the highway when the truck got sluggish. It was a cold morning, somewhere below zero. In later years, dad would say it was minus forty. Anyways, he pulled over and found that the diesel in the lines had gelled up, it was so cold. He got out his lighter and heated the metal diesel line by hand. That was enough to get the diesel flowing and we got going again.

The six of us carry the coffin over to the grave and then gently lower it into the hole.

Going with dad on his hay runs was really the only time we ever had time, just the two of us. We never talked much, we would just drive down the freeway or along some remote dirt road, sitting high off the ground, watching the scenery pass by. Dad could navigate his truck along the narrowest mountain passes. We had our stash of soda and sandwiches. I would drink my Mountain Dew while dad smoked his cigarettes, and we would listen to the chatter on the CB. The only real advice he ever gave me was to make sure that I worked in a place with air conditioning, so I didn’t have to work outside in the baking sun like a “jackass” like he did. Ironically, I can’t turn the air conditioning off in my office and it is always too cold.

Once or twice, he let me drive his truck. I never drove as much as my brothers. I’m not sure if dad didn’t think I was very good at it or didn’t have much interest. The truth was that I really wanted to learn to drive his truck, but I never really let him know.

“Goodbye, dad,” I whisper. I drop the rope and watch as it falls into the grave, hitting the lid of the coffin with a dull thud.