This article originally appeared in Spanish and Basque on Kondaira’s Facebook page. It is translated and posted here with permission. 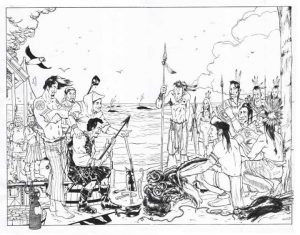 Meeting between Basques and Native Americans by Guillermo Zubiaga (used with permission).

The Basque-Algonquian language is a pidgin that arose for intercommunication between the members of the Mi’kmaq tribe, Innu and other Amerindians with the Basque whalers, cod fishermen, and merchants in Newfoundland, Quebec, the Labrador Peninsula, Nova Scotia and New Brunswick. Most of its vocabulary consisted of the Micmac, Innu and Basque languages, but also had words from Gascon, since it was the lingua franca of southwest France at the time.

While the Basques were in those waters whaling and fishing cod in the late fourteenth century, it was not until about 1530 that this pidgin was spoken. The Basques established a minimum of nine fishing settlements in Newfoundland and Labrador; the largest could hold 900 people and was in found in what the Basques called Balea Badia (“Whale Bay”), now known as Red Bay (Labrador Peninsula). The French and British sent expeditions to North America, following the routes of the Basque whalers, to explore routes to the Indies shorter than those of the Spanish, as well as to map fishing grounds. The French settled in the Gulf of St. Lawrence and began the conquest of North America.

The golden age of Basque-Algonquian would occur between 1580 and 1635. In 1612, Marc Lescarbot, writing in his “Histoire de la Nouvelle France” (History of New France), indicates that the local population spoke a language to communicate with the Europeans which had Basque words. In 1710 there was still evidence of the use of Basque-Algonquian.

Regarding this pidgin, Esteban de Garibay, chronicler of King Philip II of Spain, in 1571 published a book in Antwerp where he showed that the Basque language was not a difficult language to learn. Garibai cites the case of the Canadian Indians who had learned it:

“… Since the sailors of the province of Gipuzkoa and the lordship of Biscay and the Basque Country go each year to the newly discovered land [Newfoundland] to fish and hunt, the savages of that region learned their Cantabrian language [Basque] despite the brief communication, of such short duration, that they have with the people from here just once a year, for a period of less than three months. And if that people deprived of reason and organization is able to learn it, how much easier it would be for the people of respectable life of our old world. “

“… in a region so remote like Newfoundland the mountain-dwelling savages have learned to communicate with the Basque sailors, who go annually for the cod fish, which among other things they are asked in Basque: nola zaude (how are you): they respond gracefully: Apaizac Obeto (the priests are better): without knowing what is a priest, but by hearing about them. They speak and deal with us, and they help with the fishing on the riverbank for the barter of some cake and cider which they do not have there. “

Basque sailors also brought Christianity to those lands. This is indicated by a person from the Micmac tribe to a European missionary in his language:

In 1616 a Jesuit missionary noted that Amerindians of Port-Royal (Nova Scotia) used the word “adesquidex” (Basque adiskide [friend]) to greet the French. In 1603, another French missionary established in Tadoussac (Quebec) claimed that the Amerindians called the “Montagnais” made use of the word “ania” (Basque anaia [brother]) to greet just the French, while amongst themselves they used the word “nichtais”.

Today, place names of Basque origin in this region where Basque-Algonquian was spoken are abundant, as well as French place names that refer to the Basques.The ancient name for Montreal, Hochelaga, used by the Huron people, is considered by some etymologists to be a place name of Basque origin.

More articles on the history of the Basque Country and the Basque language are at the Facebook page of Kondaira.net: www.facebook.com/kondaira.net

8 thoughts on “The Basque-Algonquin Language of Canada”