Ahizpak.  Sisters.  Clearly a good description of Izar and Maite, two sisters who are immensely talented artists.  Ahizpak is also the name of their joint studio, in which they showcase their work.  Including sculpture, paintings, carvings, jewelry and more, they take their inspiration from their Basque heritage, incorporating Basque motifs such as the lauburu, Euskara, and dance.  You will find them at any Basque gathering in Boise or the surrounding areas.  You will also find their work at other events, contributing pieces for fundraisers for local businesses, such as the Basque Christmas tree they did for a hostipal in Boise.

Their website, Ahizpak Designs, showcases several aspects of their work.  You can also subscribe to a newsletter describing what they are up to.  So, take a look, and tell them Buber sent you. 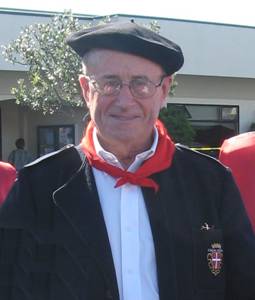 I only met him a few times, in Seattle, in Boise, in Homedale, but he made a lasting impression.  Always with a smile and with his txistu at hand, Aita Martxel Tillous always added something special to any Basque gathering, even if it was a bunch of northwesterners gathered in a hay barn, doing their best to recreate something of the Basque Country in the countryside outside of Seattle.  All who met him always remembered him.

Aita Tillous passed away, sometime in the last day or so.  He had been spending his last days in his home in France, as his illness slowly claimed him, as he described in this letter to the Basque community in the US.

He will be sorely missed.  His absence will be all too conspicuous at the next gathering of Basques.

Update: NABO has posted an eulogy of sorts for Aita Tillous.  Euskalkultura.com has a write-up in Euskara, written by Joseba Etxarri, who was often seen at Basque festivals alongside Aita Tillous.  I remember Joseba playing, on the accordian I believe, next to Aita Tillous on the txistu at our annual Basque picnic in Seattle one year.

A new tattoo has been added to the Tattoo Gallery. This one comes from Michael Bengoa of Susanville, California. He says it took him a long time to locate someone who could do the type of job he was looking for. Looks like he found the right person. Thanks Michael!

I just got a note from Roslyn Frank, a researcher into Basque prehistory. She found this podcast featuring Mikel Morris, who I recently interviewed. Thanks Roz!

Wouldn’t all our ancestors be proud!  Lisa sent me this great video of what sheepherders can accomplish when they put their mind to it.  Enjoy! 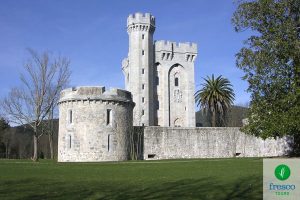 Fresco Tours, based in Spain, is a tour company that offers tours of Spain. One of their tours, Basque in the Glory Tour, is centered on that part of the Camino de Santiago that passes through the Basque Country.  Going from Hondarribia, through San Sebastian, Orio, Zumaia, and Deba to end at Bilbao and the Guggenheim, the tour focuses on the lesser known sites along the Camino.

Fresco Tours has offered a special deal — a 200 euro discount — for all readers of Buber’s Basque Page for the September 12, 2009 Basque in the Glory Tour.  To receive the discount, just enter the code BUBERBASQUE in the Special Instructions section of the Reseveration Form.

Some photos from previous tours can be found on Flickr.

A while ago (I’m still way behind on answering emails), Jose Antonio Alcayaga III wrote me.  He had just gone to Donostia, Euskal Herria as part of the University Studies Abroad Consortium (USAC) via the University of Nevada to learn euskara.  Born and raised in Stamford, Connecticut, his father, from whom he gets his Basque heritage, is from Guatemala.

Jose created a group on Facebook, Alcayagas of the World, which has brought together over 200 members of the greater Alcayaga family.  He was interviewed about his efforts to bring the Alcayagas together by EuskalKultura.  The interview, in Spanish, can be found here.

Andy Franco recently learned of his Basque roots and, since then, he has really immersed himself into all things Basque he could.  A blacksmith, who owns Calico Forge in Nampa, Idaho, he was an integral part of the recent exhibit at the Basque Museum in Boise on Basque whaling.  Andy forged the harpoons and other implements, including the lamps, that are part of the display.  He has also contributed to local fundraisers, making some beautiful lauburus and other Basque-related items, some of which are also for sale at the gift shop at the Basque Museum.

Since I learned of his efforts at the Basque Museum, Andy and I have become friends and I wanted to take this opportunity to let everyone know about his new website, Calico Forge, where some of his knife work is on display.  Right now, he doesn’t have any of his Basque related items on his site, but maybe soon, we can convince him to share some of that wonderful work too!

This past week, there have been two major events in the Basque Country. 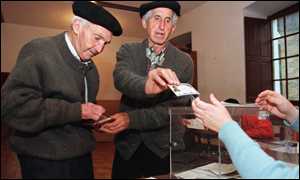 First, on Sunday, March 1, elections where held in the Basque Country (as well as other parts of Spain) for the Basque Parliament, the body that governs in the Basque Autonomous Community (BAC) comprised of Bizkaia, Gipuzkoa, and Araba.  Since the formation of the BAC shortly after Franco’s death, the Basque Nationalist Party (PNV-EAJ) has held power in the Parliament.  On Sunday, while they still won more seats than any other party, they didn’t capture a majority.  What’s more, a combination of parties that are not Basque nationalist in outlook, including the PSE-EE and PP, do hold a majority, and could elect the first non-nationalist, non-PNV-EAJ lehendakari (president) of the BAC since it’s formation.  What this will mean for a number of Basque-related issues is unclear, including language policy, the proposed referendum for self-determination, and so forth.  What is clear is that things will be different in the BAC in the future.  There is a lot of talk about what this means for the future of the BAC; see here, here or here. 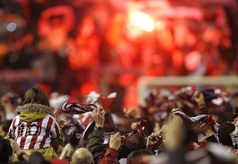 Second, Athletic Bilbao, the only team in all of the European primer leagues to not hire foreign players, won their match against Sevilla 3-0, putting the team in the Copa del Rey final on May 13, where they will play Barcelona.  This is the first time since 1985 that Athletic Bilbao will be in the Spanish championship (they last won it in 1984).  Barca last won in 1998 and holds 24 total Copa del Rey championships.  Bilbao holds 23 or 24, depending on how you count.  So, the winner of this final, again depending on how you count, could be the holder of the most Copa del Rey championships ever.  The next couple of months will be very exciting.  For more details about the match between Bilbao and Sevilla, see, for example, this article or this one. Aupa Athletic! 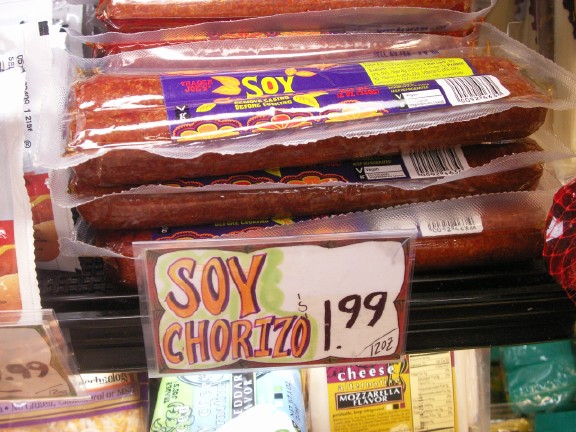 The other day, my wife and I were in Trader Joe’s and saw this display.  As a good ol’ Vasco who loves chorizo (see my previous post), it just felt wrong to see soy chorizo.